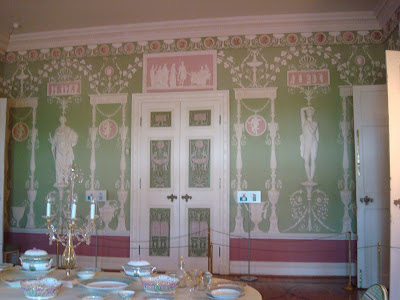 Saint Catherine's Palace in Pushkin, outside of Saint Petersburg, Russia is chock full of architectural details. Even though most are not to my liking, there was some rooms that I did like. This one was a very different style, without the gold and glitz.


I liked the muted colors on the wall and the reliefs. The table was set, I assume, in the style from many years back when the Palace was in use. 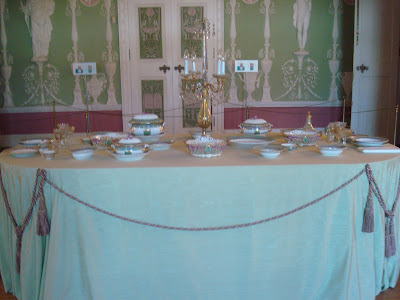 A ceiling design I also liked is below. The design is with more muted colors and less gold than the other rooms. 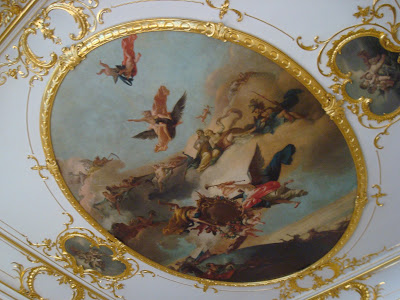 There was a separate building that we toured that I liked even better than the main Palace. It was more French styled and subtle. The ceiling below was from this area. 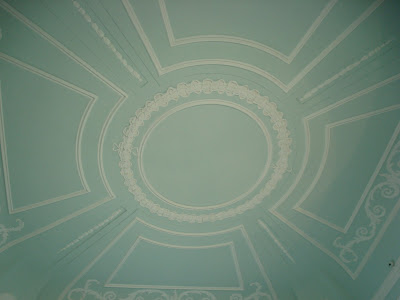 But my favorite photo of all is the lady who guarded this annex area on the Palace. I found her so interesting, especially her checkered blouse! 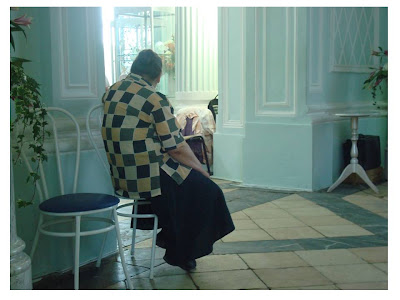 On my cruise from Barcelona to Dover, I spent two nights in Barcelona beforehand. I stayed once again at the Le Meridien, which is a fabulous hotel. As a SPG (Starwood preferred guest) member, I got bumped up to the concierge floor. Nice as I had free bottled water and fruit and access to US newspapers, a wonderful treat for me as I live in Mexico and rarely get to read the US news, except online. Information on this wonderful hotel can be found here. (It is at the corner of Las Ramblas and Pintor Fortuny, right in the thick of everything!)

On my second full day, I booked a manicure and pedicure at a great shop right off La Rambla at Canuda 22-24, information can be found here for the Raffel Pages beauty salon in Barcelona. One woman worked on my fingers while the other tackled my toes. The price was a bit more than the states but very fair for Barcelona. We chatted in Spanish and it was great fun. The shop is super nice and I was happy with the results as seen below!


After, I walked around Las Ramblas. (I never tire of this walk.) The bird market, food market and flower markets are lovely, and who can resist the giant monsters scaring all the tourists?


The food market is so incredible that my sister-in-law actually thought the fruit was fake. She couldn't believe fruit could look this nice. Makes me hungry all over again just thinking of the walk through the market. I picked up some Asian food to go and brought it back to enjoy in my upgraded room!

Posted by Luh Madera at 11:19 AM No comments: Links to this post

Welcome: Door Knockers Around the World

Nothing says welcome like a cool door knocker. The one above was photographed in Germany, along the Rhine. It was in the town where the Rhine River meets the Moselle ... Koblenz. More information on this quaint town can be found here.


My niece and I had an interesting conversation with a group in a local pub. We were having coffee. They were enjoying some beers. They spoke some English. I commented to them how much I liked their country, assuming they were locals. One of the women responded "You love Belgium?" I had to laugh. They were tourists too.


In Vejer de la Frontera, Spain, the door knockers resemble little hands. I asked our tour guide why they looked like this, and she responded that the open fist signifies "welcome."


In Barcelona, the door knockers are larger and sometimes there are two of them on a double set of doors. Double welcome!

This blog post is neither gargoyle nor graffiti, but about one of my other passions ... animals. Namely in this case, the gem of Gibraltar, or my very own Barbary ape that I fell in love with on the Rock of Gibraltar. Here is my wonderful friend.

The first stop on the cruise was Gibraltar. I have to admit, I was totally apathetic about this stop. I toyed with getting a ship tour that went for afternoon tea, even booked it before I left but canceled as it didn’t leave the dock until 1pm and we got in to port at 8am. I thought, what would I do until then? I hate to have to return to the ship to pick up a tour after I am out and about, so I decided the night before to play it by ear.


By the time I got off the ship the next morning, I planned on walking to the dolphin tour and I did walk to the marina but we got in early and everything was closed up tight, the only people around were bus and taxi drivers all hollering out did I want a ride to the rock?  I didn’t. I decided to walk.

With trepidation that comes from being a 55 year old woman traveling alone, I began my journey with the Rock in sight. I stopped along the way numerous times inquiring was I headed in the right direction. I could see the Rock but was scared to get lost. If I spoke in Spanish, they shook their head and answered in English. When I spoke in English, where is the cable car, they answered in Spanish, “Teleferico?” “Si, teleferico" .. the cable car and they pointed right or left and I kept on walking. Construction was going on everywhere, buildings going up, men in hard hats pointing and waving, digging ditches. Lots of activity.

I walked for about an hour and a half and finally came to the ticket office. With some confusion over the price of the tickets as there are a few options, I opted for the complete tour and paid and a kind-faced guy with a red cap said I was with his group, and we all shoved in tight on the cable car and were whisked to the top. The cable car was a thrill! 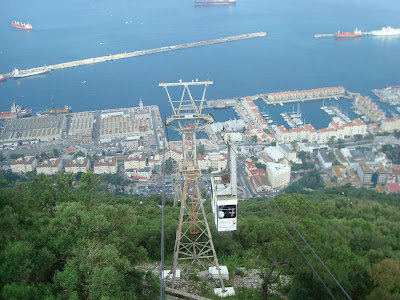 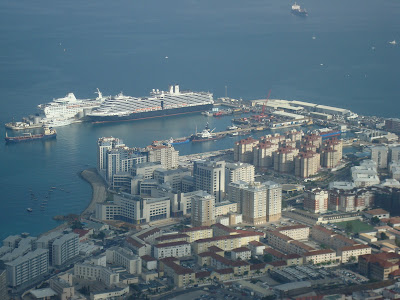 Alan, our guide, was great. He took us to the Siege Tunnels and explained how they had been cut out by hand and we walked on the jagged damp rocks, sliding down as we went …. I took baby steps so I didn’t fall and it was so damn interesting. I enjoyed that tour so much.

I marveled at the air strip as we stood at the lookout point as a plane came in with a runway so short, I held my breath until the plane landed. I saw the mist over the Rock and watched it disappear and the sun came out and the day was crisp and perfect. 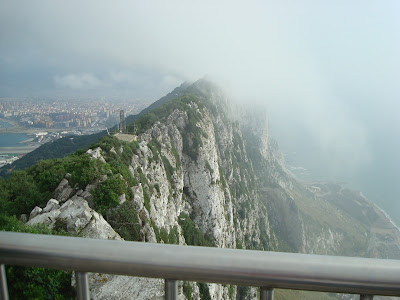 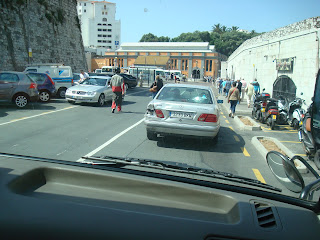 I loved the crazy cars that park so close together, each and every one is battered and dented, tail lights bashed out. I listened as Alan told us about the low crime rate and how not long ago, most everyone left their doors unlocked at night and even though now they do lock their doors, the crime is still pretty negligible. I loved when he spoke of living in Spain and riding a motorbike across the border when he went to work and he pointed to his house across in another country. He was so friendly and open and kind, a man born in England who moved to Gibraltar and obviously took great pleasure in showing us around.
I cannot say what I loved more ... meeting Alan or my new friend the Barbary ape!

A great blog on the apes…..
http://speakin-colors.blogspot.com/2009/08/british-superstitionsgibraltars-barbary.html 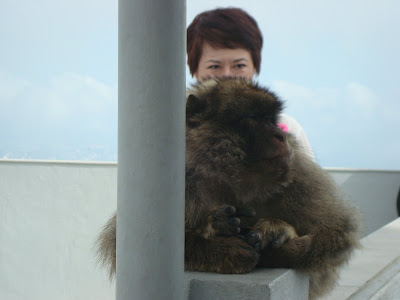 I took a photo of a beautiful woman behind one of the apes. This is for you, my friend. I am sorry I forgot to get your email to send you a copy. Hope you see it here! (Don't forget to check out my other post on the Barbary apes .... a contest to see which one you like best!)
Posted by Luh Madera at 8:04 PM 7 comments: Links to this post

The ride to Gdansk from the port of Gydnia was almost as interesting as the town of Gdansk in Poland. More info on Gydnia can be found here. We went to Gdansk on a Baltic cruise, and I am fairly certain not many cruise ships stop there. The ride was definitely gargoyle-oriented.


Note the old buildings, decay and dirt. Very interesting though. 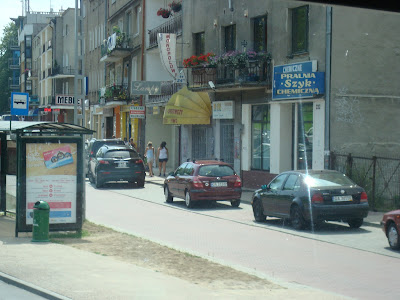 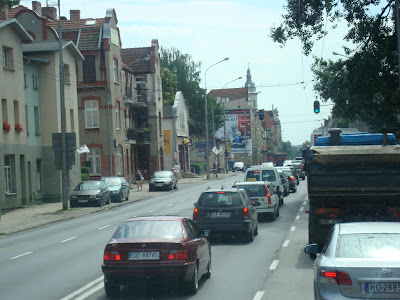 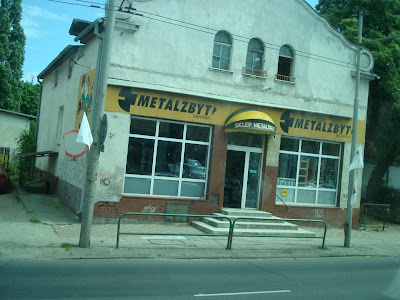 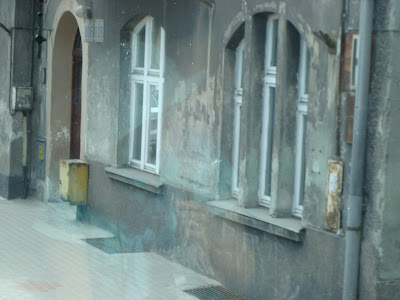 Arriving at Gdansk is kind of like arriving at Disneyland or Disney World, but the ride there is definitely a lot different. The remnants of the Communist rule are everywhere, with a pervasive sadness that envelops the entire area. The people on the other hand are charming, smiling, fun and resilient.


More info on Gdansk can be found here. As you can see from the crooked photos, our trip involved a lot of swaying back and forth on the bus. One tip - very nice and inexpensive amber jewelry can be found here. 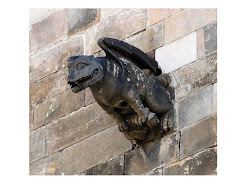 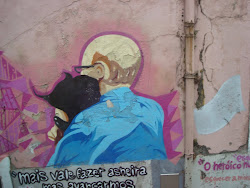 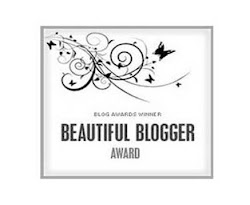